The Jackal, Stag, and Crescent

From the necropolis to the moonlit grove

In discussions of Witchcraft, it’s common to hear or read about how peoples’ lives change for the better through its practice. One can easily find accounts of witches who improved their lot in life: better jobs, more romance, a greater sense of belonging, or protection from enemies. Also common are accounts of witches who find spiritual revelations: a greater connection to Nature, a personal relationship with god(s), or the discovery of one’s own divinity. But the most important power granted by the practice of Witchcraft I’ve discovered is one that is least often given the place of importance it’s due: personal transformation—specifically, the sort of personal transformation that liberates the witch from the deleterious shackles placed upon us by society—through the power of Witchcraft’s inherent subversive nature. And so, I discuss how Witchcraft can liberate through its ability to empower, its rejection of sexual repression, its opposition to body-shaming, and it’s utter antagonism towards the patriarchy. 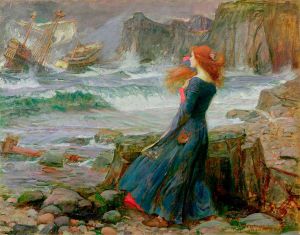 What’s this? Oh yeah, my power and agency all up in your ship, Rob. All sea, no shade.

Witchcraft certainly, as previously mentioned, does grant us an ability to create change in a real, manifest way through its practice. It can deliver us more options in careers and love, more material wealth and position, and even more control over people that we would otherwise lack without it. The practice of Witchcraft allows us to affect the physical world in very real ways but I found that the real value in that is not the effect itself but that I am empowered. That is, Witchcraft grants me the ability to exert influence and agency in my own life even when mundane, i.e., non-magical, means of doing so prevent it and the value of that is profoundly empowering for one’s psyche. As a young man, Witchcraft enabled me to put an end to an abuser’s power when mundane options proved impotent. While it was immensely satisfying to be able to put a stop to the abuse, it was even more critical to realize that I did and could affect my circumstance and that I was not and would never again be powerless. This first liberation of Witchcraft was the realization of my own power and agency.

Witchcraft also empowers and therefore liberates by requiring that the Witch think for himself by developing a personal ethical system as opposed to simply inheriting a morality from society. Witchcraft has no dogma. It offers neither any moral commandments nor prohibitions. In Witchcraft, developing one’s own set of ethical principles, founded on reason, becomes a necessity. In order to determine how best to use one’s aforementioned power and agency, the Witch must possess an understanding of ethical action. And instead of simply accepting the pervading morality of our culture, which is arguably antiquated and Abrahamic, I had to determine for myself what was ethical and what was unethical; I had to critically evaluate society’s moral judgments on topics such as sex and sexuality, the meaning of and qualification for life, violence, drugs, and personal autonomy. This exploration of fundamental human questions and the requisite formation of a personal philosophy as a means to live a good and meaningful life liberated me from many of the prejudices and assumptions with which I had grown up and helped me become a person whose ethical judgments are based on reasoned reflection. The second liberation of Witchcraft was the rejection of socialized moral systems without reason and the subsequent development of a rational personal philosophy. 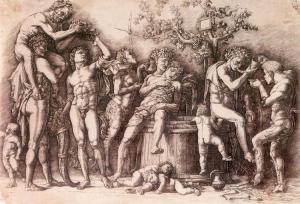 The Gay Pride After-Party, circa 450 BCE. Iolas, we’re all happy you can adopt now. But seriously, get a fucking babysitter.

Much of the Western world’s views on sex and sexuality are colored by the Judeo-Christian worldview, which historically has taboos or moral prohibitions against perfectly natural aspects of human sexuality like homosexuality and recreational sex. This prejudicial attitude towards natural expressions of sexuality are so ingrained in our society that it had been heavily legislated against in decades past and continues to be the source of legal battles throughout our culture. But, as already discussed above, Witchcraft has no dogma nor codified morality; it offers no judgment on human sexuality and sexual practice. Instead of establishing taboos or prohibitions, I found that Witchcraft celebrates sex and sexuality—all forms of it—as sacred: “all acts of love and pleasure are my rituals”, says the Goddess of Witches in Valiente’s seminal prose. What’s more the frequent celebration of sexuality, fertility, carnal passion, and life in Witchcraft through ritual, symbolism, and mythology revealed an inherent openness, acceptance, and reverence towards human sexuality that is not present within broader society, least of all the dominant religions of broader society. It was through Witchcraft that I found not only acceptance of my own homosexuality but a celebration of it. Witchcraft is the foundation from which I was able to demand my rights and needs as a non-heterosexual person; and it was Witchcraft that allowed me to fully own my sexuality—my desires, my needs, my expression, and the frequency with which I engaged in sex—without condemnation, judgment, or shame. The third liberation of Witchcraft was escape from sexual repression and oppression.

Robes? To cover up all this deliciousness?

Undoubtedly due to its values regarding sex and sexuality, mainstream society also has a deeply flawed relationship with the human body. Beyond the social taboos society continues to reinforce on public nudity, nudity in art, and nudity in other media, society even legislates against it for entirely natural and necessary reasons such as breastfeeding. We are explicitly told that our bodies should be covered and hidden and then implicitly told that exceptions are made and encouraged for those who fit the ideal physical aesthetic through art, media, and social pressure. But Witchcraft instills no shame of the human body. On the contrary, if anything, Witchcraft celebrates the human body, the vessel without which, celebration of sex, sexuality, fertility, passion, and (human) life would not be possible. So much so that it’s traditional to practice Witchcraft entirely in the nude, contrary to what society would expect of a religion. It’s not uncommon for Witches to stand naked before one another as equals and this, seeing each other laid bare, engenders an acceptance, appreciation, and love for one another and onseself. So, it’s no wonder that it was through Witchcraft that I, previously plagued by a nearly debilitating sense of shame for my own body, came to truly see myself and find comfort in my own skin. And this gift—the gift of freedom from body-shame and total ownership of my body—was the fourth liberation of Witchcraft.

And so we come to the most important ways that Witchcraft can liberate us from the one of the sickest of our social ills. Our society is founded upon a narrative of powerful men and it perpetuates that narrative like a virus. Our society is, for all intents and purposes, rooted in patriarchy. It sees women as secondary persons, if it sees them as persons at all; it devalues womanhood or portrays it as obscene; and, it teaches men that power is what defines them and separates them from women, among many other things. (Here I must admit that I am in no way the best voice for how Witchcraft can liberate us from patriarchy—to that end, the most profound voices on the topic would be women—but I can speak on how it began to liberate me from this social influence and how it continues to do so.) But Witchcraft, arguably, empowers women more so than any other religion. There exists in Witchcraft a recognition of the Divine Feminine, or a Goddess, as not only a figure worthy of worship but one on equal footing with the Divine Masculine. It requires no explanation to suggest that this isn’t so of the dominant religions of our culture. Women themselves, too, are often leaders in Witchcraft and can more easily be found leading groups and religious organizations than female members of mainstream religions. Womanhood, Women’s Mysteries, and the power of women are recognized as sacred and are not treated with derision, contempt, or made to seem obscene. And so, this natural tendency in Witchcraft to have powerful women as leaders, in turn, teaches men that power is neither integral nor unique to being male. It, too, teaches men that their manhood nor masculinity need neither be threatened nor lost by being a supporter instead of director, and an ally instead of a champion. And that is the fifth liberation of Witchcraft: it unfetters and loosens the grip of the patriarchy on both women and men.

So, that’s how Witchcraft has liberated me. Has it liberated you?

4 Comments to “How Witchcraft Liberates”